Swimming across the gulf of Finland

On Friday, July 25th 2008 six Estonians undertook a long-distance open water swim across the gulf of Finland from Porkkala peninsula in Finland to Suurupi peninsula in Estonia with the total distance of 55 km (34.4 miles). The team consisted of five men and one woman. The men were Bruno Nopponen, Priit Vehm, Henri Kaarma, Toomas Haggi, and Andrus Jaamul. The ladies were represented by Kinne Tõnnison. The swimming started at 6:02 am and after 19 hours and 18 minutes on the sea a swimming coach and veteran swimmer 34 years old Bruno Nopponen came into the land in Suurupi 01:20 am on Saturday, July26 th, 2008. The gulf was also successfully crossed by TV cameraman Priit Vehm, an amateur open water swimmer, who finished the course at 4:24 am after 22 hours and 22 minutes of swimming in below 20 degree Celsius waters.

On August 8th, 2007 Nopponen, Kaarma and Vehm swam downstream by the river Emajogi from second largest lake of Estonia called Vortsjarv to Tartu, the distance of 57 km. That long swim downstream took 11 hours. It was a success after the failed attempt year earlier. On July 12th, 2005 Priit Vehm scaled also the waters between mainland Estonia and island Hiiumaa, 26,4 km from Rohukula to Heltermaa. He also undertook swim from Rohukula to island Vormsi on 2004. Priit Vehm works as a professional TV cameraman on films and programs. Team member Henri Kaarma accomplished on August 6th, 2006 a 26.4 km marathon-swam from Rapperswil to Zürich in 7 hours and 22 minutes.

The swimmers started gulf crossing at 6:02 am (all times are Estonian Time= GMT +02:00) from Finland's Porkkala peninsula in Kirkkonummi (lat=59.965668, lon=24.392567). Initially planned start at 5:00 am was slightly delayed due to farewell interviews to Finnish TV channel Nelonen. The weather was one of the best this summer with clear skies, air temperature at the start around 17 degrees Celsius and water temperature in the gulf 17.7 degrees Celsius. During the day skies stayed cloudless, air temperature above 20 degrees and water temperature went up to 19 degrees. The wave height was projected to be up to 0.5 meters and slight (or rather non-existent) backwind from 2 to 4 meters. In short, it was almost perfect weather for such a swim.

Around noon the swimming was made more difficult by reaching the major crossing of shipping routes in the gulf and the waves created by passing vessels. At 12:16 pm, after 6 hours 16 minutes and 20 km into the distance Andrus Jaamul and Kinne Tõnnison abandoned the endeavor due to fatigue. At 6:00 pm after 12 hours and close to 32 km of swimming Toomas Haggi climbed into his supporting boat. At 19:17 fourth swimmer Henri Kaarma abandoned the attempt. Financial analyst Henri Kaarma was the only one who tried the course without fullbody swimsuit- calypso, dressed only in trunks and coated with Vaseline.

Somewhat expectedly Bruno Nopponen took the lead and raced ahead of others. Information update around 9:14 pm suggested he had just 11.8 km to go and swam with speed above 2km/hour. Priit Vehm had lower pace and was 17.2 km away from their goal at the Suurupi peninsula. 18 hours into the race, it was difficult for two men to keep their pace, and Bruno Nopponen seemed to consider the island Naissaar as an alternative destination, but his support crew encouraged him to carry on to the mainland.

Fortunately coastal waters helped Nopponen to pick up the speed. At 00:32 am on now July 26th, 2008 Bruno Nopponen was according to the crew of his support boat only 1.7 km from Estonian coast, while Priit Vehm had still 8.5 km to swim. His support crews reported that he had drifted from planned route to the East. Report around 01:00 am suggested Bruno Nopponen had just kilometer to go, while Priit Vehm was still 7 km away from dry land.

FINISH!!! At 01:15 am on Saturday, July 26th, 2008 swimming coach Bruno Nopponen came to the land in Suurupi peninsula Estonia (approximately lat=59.473200, lon=24.392316) . Priit Vehm had still 6.3 km to swim due to his lower pace and the unfortunate drift to the East. He was expected to finish around 03:30 am. At 02:00 he was 5 km from Estonian coast. At 03:10 am he had 2.5km to swim and was expected to finish by 4 am. He eventually came to land at 04:24 am after 22 hours and 22 minutes of swimming. Because of the drift and the course correction Priit Vehm presumably crossed the longest swimming distance during this long day’s journey into the next morning.

Thus, Bruno Nopponen became the first person to perform non-stop swimming across the gulf of Finland from Finnish mainland to mainland Estonia. On August 17th, 1931 Estonian Aleksander Laas also swam across. He started from Tallinn in Estonia, but due to the bad weather he made a stop on island Naissaar near Estonian coast. When the weather improved, he restarted from island around 07:00 am at night and after 19 hours of swimming came to land on a small island near Porkkala, very close to the place from which this team of six started.
Posted by Henri at 12:09 PM 2 comments: 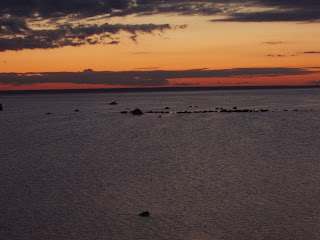 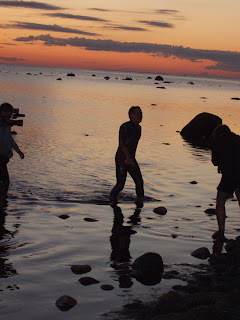 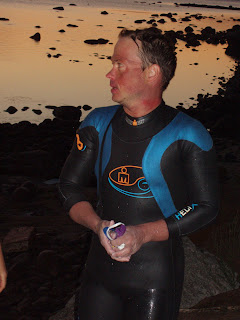 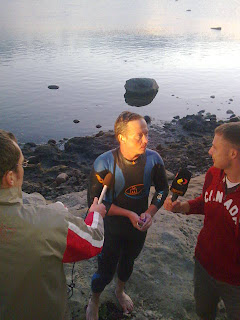 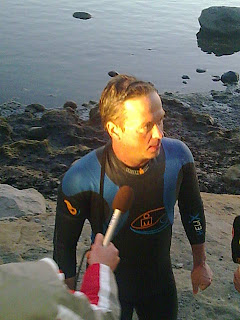 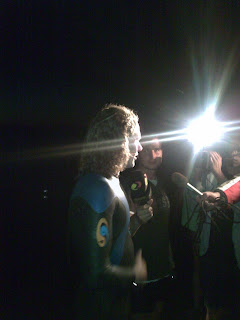 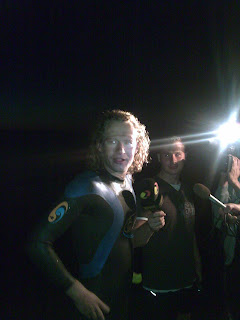